Insights: Bulge brackets, mini-conferences and the continued evolution of the corporate access business

In late 2018, we published an article in IR Magazine that drew conclusions about the state of play in the cash equities business and the corporate access landscape. We presented our analysis based on a review of the conferences that had been announced for the first half of 2019 as compared to the same period in the prior year. The premise was that conference budgeting decisions might be a leading indicator for changes afoot in the capital markets. After all, a conference can be an expensive undertaking and generally needs to be planned and marketed months in advance.

As we have discussed before, the structural decline in the cash equities business continues.  Total bundled commissions are down 40% since 2016 and 60% since 2009.  This accelerating rate of decline has increased pressure on banks to manage costs, resulting in layoffs, departmental restructurings and greater firm-level management of research coverage decisions.

To our point, the conference and corporate access business has changed as well. 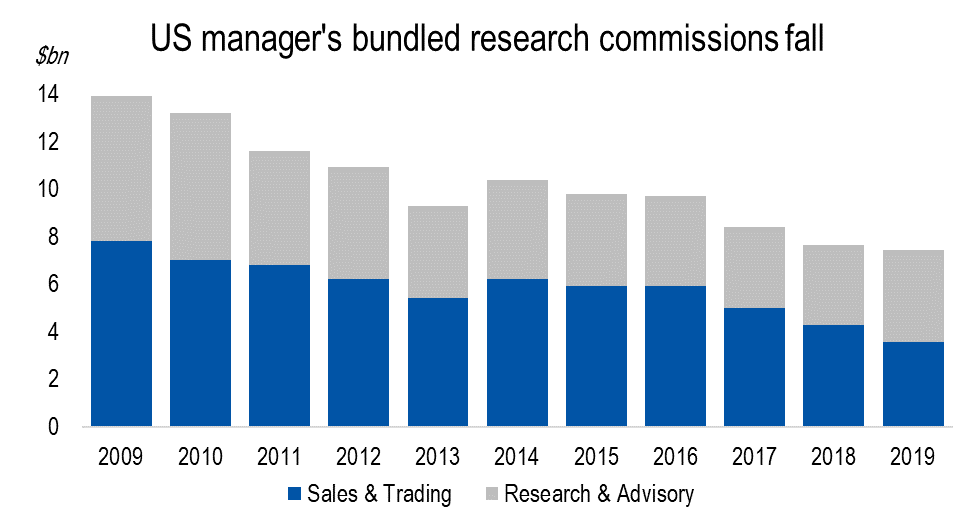 With the benefit of hindsight, we now look back at 2019 to see how things played out relative to our expectations. Our findings are contained throughout the document, but out of respect for our readers’ time, here are four primary observations: 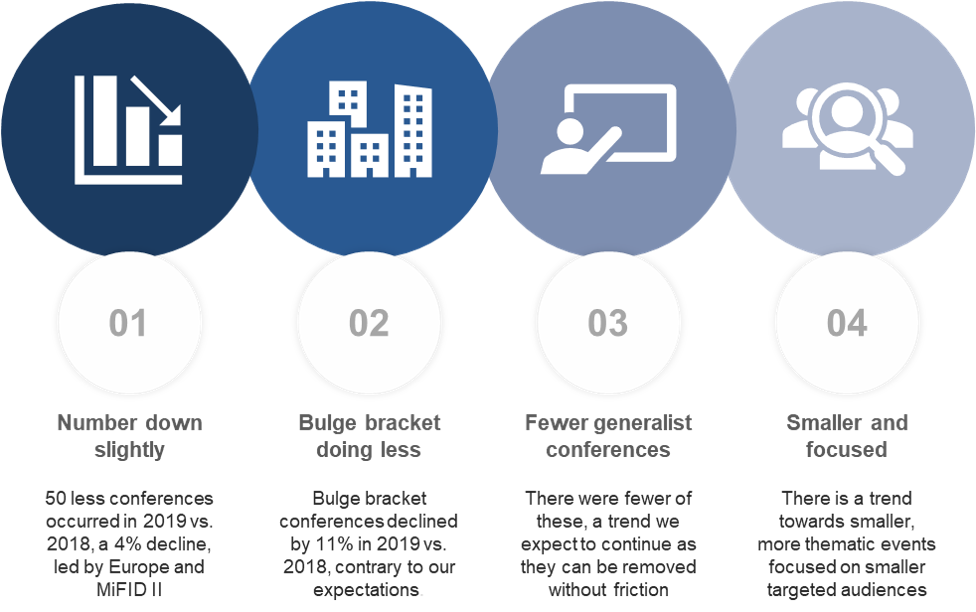 With the above as preamble, let’s go through the data and draw some new conclusions. Our findings are based on data, but they are interpreted by folks who have decades of experience in topics like equity research, institutional sales, corporate access and business management. As we like to say (often), data in the absence of informed judgement is of little value.

Last year, we forecasted (i) a decline in the absolute number of bank-sponsored conferences; (ii) a “pronounced drop” in conferences sponsored by boutique and regional banks; and (iii) bulge bracket banks as a beacon of stability. Each of these expectations proved to be incorrect in some ways, although we did of course hedge ourselves by cautioning readers not to look past the first half of the year as conferences are generally not marketed more than six months in advance. However, while we can’t take credit for being precise, we were certainly accurate in certain respects.

Fortunately, our goal wasn’t to be “right.” Rather, it was to interpret data and draw inferences. Just like we advise our clients to adjust their narratives as conditions evolve, we do the same here. What the data did conclusively show is the continuing shift in sell-side behavior as well as the increasingly challenging landscape investor relations departments need to navigate.

Looking at the multi-year trend, conferences continued to disappear in Europe, the birthplace of MiFID II. The only regions that saw growth in conferences were Australia and South America, but we’re talking small numbers.

For those readers who are really really visual, the “heat map” below summarizes the year-over-year change in bank-sponsored conferences by sector. European TMT and North American Energy companies, please take notice.

Let’s move on to some of the more interesting findings.

BULGE BRACKETS (NOT) LEADING THE WAY

One of the biggest surprises we found was the large decline in the number of conferences organized by bulge bracket banks, which completely defied our expectations and also the expectations of many commentators who had forecast industry consolidation and the continued resolve of the bulge bracket. A year ago, we mused about the “haves and the have nots” and posited that smaller firms would get squeezed while the big got bigger. While the lion’s share of equities revenue still belongs to the bulge brackets, these firms are clearly rationalizing their resources as the total commission pool continues to shrink. While time will tell, this looks like a retreat more than a consolidation.

In fact, of the universe of investment banks that sponsored one or more conferences in 2018, the biggest reductions in conferences came from bulge bracket banks. While each of the banks listed below obviously started at a high number, some of these figures are dramatic. It is worth noting that each of these banks announced a significant headcount reduction and internal restructuring within the last 18 months. 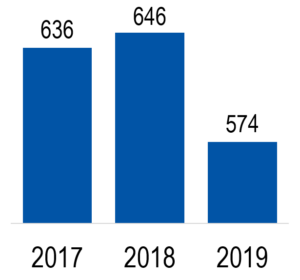 Looking forward, we expect to see further impact from recently-announced and rumored restructurings of cash equity departments. For example, just last month, Macquarie Group announced that it was “repositioning” its cash equities business to focus on the Asia-Pacific region. There go another 11 conferences between North America and Europe.

GENERALIST CONFERENCES ARE DISAPPEARING, AND IT MAKES SENSE

Another interesting observation is that conferences have clearly become more thematic and focused. Of the various ways we tried to make sense of the data, we sought to identify conferences that were not sector-specific. These include regional events (e.g. [Insert City Name] Corporate Day), “Ideas” conferences and small and mid cap conferences. Broadly speaking, these are conferences that attract generalist investors.

Multi-sector (i.e. generalist) conferences saw the steepest rate of decline of all conference types. These conferences can be an effective way of getting in front of long-only generalist fund managers. If we assume that conference budgeting decisions are being driven by client wants (they are) and that a bank’s largest clients are hedge funds (also true), we can reasonably conclude that hedge funds do not place value on generalist conferences. From the bank’s point of view, they don’t add “franchise value,” there is little risk of offending corporates and a bank’s “commitment” to a sector will not be questioned following its decision to delete a conference that isn’t married to a specific sector. Goodbye, generalist conferences. 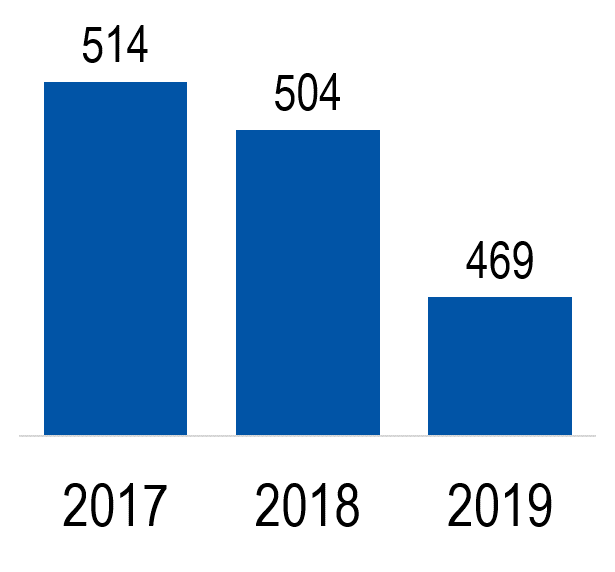 SMALL IS NOT BEAUTIFUL

Similarly, additional analysis showed a subtle, but discernible, trend towards smaller, more thematic events. We performed a keyword analysis on the list of ~6,000 bank-sponsored events held over the last three years and found a 10% annual increase in “forums,” “seminars,” “summits,” “symposium” and, ironically “mini-conferences.” It’s a slight rebranding of an event, but it’s important.

Despite the name, there is nothing cute about a “mini-conference.” It is designed for a highly targeted audience, and corporate invitations are based on which companies can drive the most commission dollars (as opposed to high-quality investors) to the conference. Banks are less concerned with filling a (downsized and less expensive) room with the right investors than they are with keeping the lights on.

Likewise, banks have also sought to consolidate conferences. For example, an energy conference morphs into an energy and industrials conference with a net result of one fewer conference and corresponding dollars saved.

YOU CAN “BANK” ON IT

Finally, looking back to our prior report, the trend in shifting resources away from less “bankable” sectors remained intact. Sectors like energy and industrials where equity offerings and “fast money” are largely absent continued to experience declines in conferences and bank resources in general. Conversely, healthcare and consumer (led by cannabis) continued to rise. Again, this was likely driven by necessity and the fight for survival.

Two years ago, most public companies had barely heard about MiFID. Those that were more familiar with the directive didn’t foresee much of an impact in the US or were primarily focused on the potential impact on research coverage. Today, the reality has set in for many. Companies are increasingly frustrated with the investor access traditional channels provide. This was highlighted earlier in the year by a recent IR Magazine survey, which we summarized here. As shown in the excerpt below, companies are experiencing a decrease in investor meetings as well as research coverage.

Issuers need to devote greater efforts to identify and directly interact with an audience of the “right" investors.
Read Insight

The majority of the conference 1×1 schedules we see these days are dominated by hedge funds and occasionally by institutions that don’t seem to make any sense based on their investment mandates. Far too many schedules are packed with channel checkers, “fillers” and poorly-matched investors. This isn’t new, but it’s getting worse.

When onboarding a new client, we are rarely surprised to find that the numerous institutional investors we speak with on a daily basis have never met our client or see them so infrequently relative to the obvious match between a fund manager’s investment mandate and a client’s financial profile.

At the same time, we are encouraged that the investment community continues to place as much value on meeting management teams than ever before and is increasingly receptive to working with us, outside of the regular sell-side channel, to meet and develop relationships with our clients. We are likewise fortunate that the structural decline has put us in the position where we have been able to build a highly talented team of individuals who saw the writing on the wall and the value in our business model.

The bridge between the institutional investor community and public companies will likely continue to crumble as the cash equities business continues to suffer.  Let's also not forget that the changes described herein have occurred in a low interest rate environment where stock indexes have been propelled to record levels.  What happens when that support erodes?  What is clear to us is that companies that recognize the new paradigm for what it is and take action will be afforded a competitive advantage.